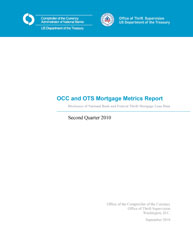 Performance on home mortgages serviced by the largest national banks and federally regulated thrifts improved earlier this year for the first time in more than two years, according to a report released today by the Office of the Comptroller of the Currency and the Office of Thrift Supervision.

According to the OCC and OTS Mortgage Metrics Report for the First Quarter 2010, delinquency rates dropped in the quarter, with improvement in all categories of mortgages—prime, Alt-A, and subprime. The percentage of mortgages that were current and performing increased for the first time since the agencies began publishing this report in June 2008. Mortgages in all stages of pre-foreclosure delinquency improved during the first quarter, with the percentage of mortgages that were 30-to-59 days delinquent, 60-to-89 days delinquent, and 90 or more days delinquent all declining.